In this tutorial, we cover how to import data from the Stray Scanner app into the Stray Command Line Tool and Stray Studio.

To walk through this tutorial, you will need:

While this tutorial covers the Stray Scanner app, you can import data from any other depth sensor. Here is an example on how to record data using an Intel RealSense sensor.

The goal of this tutorial is to scan a scene using a depth sensor and convert it into a dataset that follows our scene and dataset format. If you have some other depth sensor you can reach out to us and we can hopefully add support for your depth sensor. If you are dealing with some other dataset format that you would like to import, you can always write your own data format conversion script.

First, we need to record a scene to process. This is done by opening app, tapping "Record a new session", then press the red button to start a recording. Then scan the scene by filming a short clip that views the relevant parts of the scene from different viewpoints.

Pro tip: you can tap on the video view to switch between depth and rgb mode.

Some suggestions to get the best possible results:

Moving the data over to your computer

Now that we have a scene recorded, we can move it over to our computer.

Here, we use a macOS computer with Finder. If you are on Linux, use the iOS Files app to access the Stray Scanner folder and move it over through a cloud service or share it through some other app.

First, we create two folders: a dataset folder which will contain our processed imported scenes and a staging folder where we temporarily keep the Stray Scanner scans. To create these, we run:

To move the files over to the staging folder: 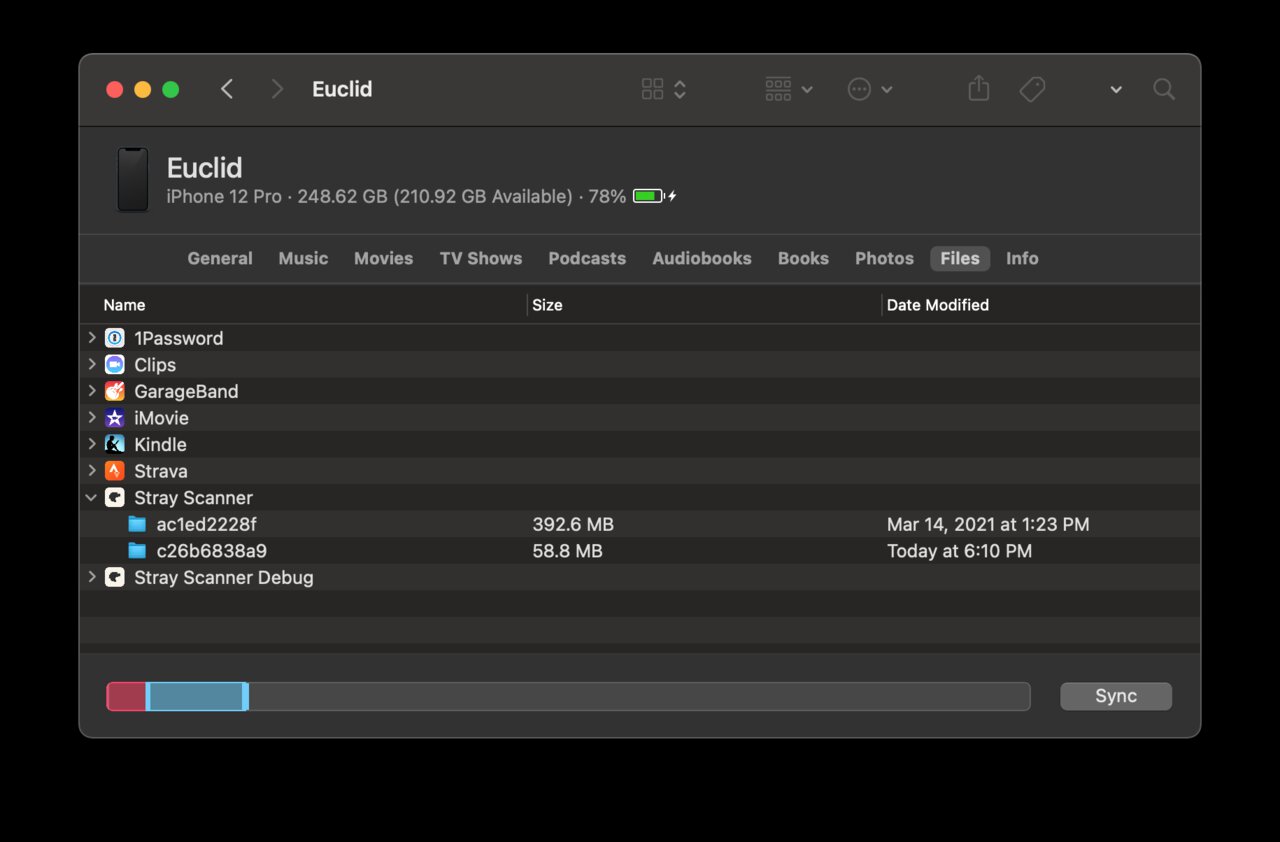 Note: The directories are named using random hashes, for example "ac1ed2228f". This is to prevent conflicts with scenes collected using other devices, when you are collaborating with other people. This avoids having to rename them later, though we do agree that it can sometimes be hard to keep track of which scene is which. Feel free to rename the rename the folders however you like.

Now that we have moved over the scenes, we can import and convert them to our data format and into our dataset. This is done with the stray import command:

Optionally, you can specify the resolution at which you want to import the dataset by appending --width=<width> --height=<height> to the command. For example, stray import staging/* --out dataset --width=1920 --height=1440. Generally, we recommend a larger resolution, but sometimes, smaller can be easier to work with and can be good enough quality wise.

Now we have successfully imported our first scene! Now it's time to move on to the next step, which is integrating your scenes. The integration step, takes a scene, recovers camera poses and creates a 3D reconstruction of the scene. This allows us to label the scenes in 3D.